From 2009 to 2017, Mrs. Thabela served as the Provincial Education Director for Matabeleland South Province. As the highest-ranking education official in the province, she oversaw about 8,600 staff and more than 650 schools. She was responsible for the strategic direction and leadership of the education sector as well as the development, implementation and monitoring of education policies and programmes. She successfully built partnerships with other Government agencies, civil society, communities and the private sector to increase and improve access to quality education.

From 2004 to 2009, she served as the Deputy Provincial Education Director for Matabeleland South Province, where she was responsible initially for Administration and subsequently, Quality Assurance. In that position, she led the provincial mainstreaming of vocational education to improve pass rates and opportunities for youth, in line with the recommendation of the Presidential Commission of Inquiry into Education and Training:1998 (commonly referred to as the Nziramasanga Commission).

Mrs. Thabela started her career as an English teacher in 1982 and quickly rose to become the Head of the English Department at Mzingwane High School, one of the oldest schools in Zimbabwe. She was promoted to the position of Deputy Head of School in 1988 and subsequently became initially Acting Head and then substantive School Head (serving at three schools between 1989 and 2000) from where she was regraded to Gwanda District Education officer from 2000 to 2004.

Mrs. Thabela's collaborative leadership, intimate knowledge of the education sector and strong management experience will be a great asset in her new position. She brings to the position of Permanent Secretary a commitment to equitable access to education and more than 36 years of experience in Zimbabwe’s education sector. She has worked as a member of the Provincial and National panels responsible for English Language and Literature in English examinations at the Zimbabwe Schools Examinations Council (ZIMSEC), where she has also been a board member since 2014. She was also a member of the Matabeleland South Regional Management Board of the Higher Education Examinations Council (HEXCO).

In addition to her work-related appointments, Mrs. Thabelahas also provided leadership in civic organisations. She has served as the Chairperson of the Evangelical Lutheran Church’s -highest governing body- the national governing assembly. She is also a member of the Forum for African Women Educators (FAWE)- an organization that helps to advance the cause of educating women in Africa. 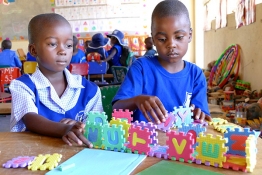